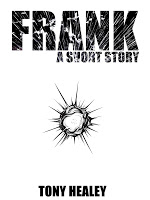 Yesterday I downloaded a short story from one of the other authors involved in the Kindle All-Stars project – Frank by Tony Healey.

I really enjoyed it. It is very much an action adventure story, and it is firmly plot-driven, but it doesn’t sacrifice character for plot. The protagonist – craggy anti-hero Frank – certainly doesn’t come across as one-dimensional.

It does well at building an atmosphere of tension early on, and there are some nice touches to grab the reader’s attention and keep those pages turning – I particularly liked this line (which appears early, before we really even know who Frank is):

He only needed the job to maintain a low profile for at least a few more months; otherwise he would have killed them all already.

It’s a science fiction story, and I should mention that it deals well with the element of sci-fi that irritates me the most when done badly – the explanation of future technologies. Tony Healey incorporates numerous elements of a future universe that are completely alien to our time, but he does so with subtlety and with an understanding that the reader doesn’t need to be told exactly what the “Terran Union” is or how a “sonic grenade” works. We’re readers, so it’s a given that we have imaginations – I was glad to see that he encouraged his readers to use them.

Overall I found this story to be engaging and entertaining, and I look forward to seeing more from this author. Not least his story in the upcoming Kindle All-Stars Presents: Resistance Front anthology…!

Star ratings are so subjective as to be almost completely meaningless, so I’ll leave it to you to interpret it when I say that if this were Amazon then I’d give it four stars (to me five stars implies that it couldn’t be better, and almost everything ever written could be better).

You can find Tony Healey at http://fringescientist.com/ or on Twitter: @FringeScientist