I wrote recently about book covers (and Slavic pimps), and ended the blog post with the tantalising threat that I would write more about what I thought makes a good book cover in this confusing modern era of ebooks and online retail.

So this is me doing that.

As I see it, a modern book cover has to achieve two main objectives:

1. Catch the eye of someone scanning an array of small, thumbnail images – potentially on a small-screened tablet or smartphone
2. Convey either the book’s title or the author at a glance when reproduced as a small thumbnail image

Everything else is secondary. Sure, some people will look at the cover – and you’re probably going to want to stick to the conventions of pastel for chick-lit, black or blue for sci-fi etc – but all your cover needs to do is get someone to click that link.*

Once they’ve spotted the image and hopefully clicked the link, the star ratings and reviews and look insides will take over.

So, how do you achieve those two objectives?

Giving a book a striking base colour isn’t exactly rocket science, but bear in mind that most book retail websites will have a white or light background – so lighter images run the risk of losing their impact, or even being lost against the back of the website.

It’s the equivalent of designing a print book cover that looks like a bookshelf.

I’d also recommend no more than one or two colours, because once the image is reduced down those colours will bleed together. What looks good full-size may not work when shrunk.

When designing an image that is going to be routinely reduced in size, simplicity has to be the motto.

A painstakingly detailed false-colour woodcut of an 18th century Bavarian peasant boy caressing a piglet may be breathtakingly beautiful when viewed on a laptop screen, but when you thumbnail it all those baroque curlicues and filigrees squish and clump and scab together to become a barely distinguishable melange of pixels and you’re left with what looks like one of those magic eye pictures from the past, only when you squint at it the image that is eventually revealed is of a badly designed book.

Keep the images simple, reduce the clutter and you’ll end up with something that’s striking whatever size at which you view it. 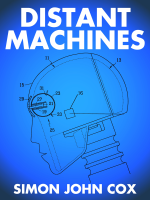 The text has to be visible when the image is shrunk down to thumbnail size, so either the title or the author’s name should be large enough to be legible when reduced.

If you’re famous make it your name. If you’re not, go with the title of the book.

NB If you’re reading this then you’re not famous.

In terms of which fonts work best I think that sans serif is probably better, but I think there is a lot of room to manoeuvre here – some fonts will translate better than others, and it’s simply a case of trial and error (mostly error, if my experience is anything to go by).

In addition, colour the text so that there is high contrast between it and the background image. I would go with very dark text on a light background, or white text on anything else.

That’s it. I don’t think it has to be particularly complicated. You’ve seen good covers, and you’ve seen bad covers, so you know what I’m talking about.

Keep in mind that you’re all you’re trying to do is persuade someone to look a little closer at your book. So keep it simple, be bold and be clear.

* For “click that link” you could equally say “pick it up, read the blurb and flick through it”; while the approaches that I outline here are primarily aimed at getting the cover noticed on an online retailer, the principles would equally create a pretty striking print book…so I don’t see any downside to approaching the design with online as the primary channel and ebook as the primary format.